To say that „Flat design is extremely popular” is to say nothing. The Flat design took over the design world. Microsoft (since 2010), Google and Apple adapted the flat design to some extent and thousands of designers followed (check out the Flat Design Showcase).

The simple and clear aesthetics of the flat design is easy to recognize and become a brand on its own rights. Some designers though tend to see it as the beginning of the revolution:

„I believe that the flat design trend is a symptom of the growing maturity in the field of web and interface design. This maturity applies to our designers – who are getting better at making interfaces that encourage interactivity and engagement – as well as to our users.” /Marci Ikeler, Designer and Founder of Little Arrows

„In essence, the flat era of design has narrowed the constraints but surprisingly expanded our approach towards design. Skeuomorphic design was not a trend, it was necessary for technology to be adopted. Now that it is, flat design is another necessary step that will facilitate exploration of new design techniques that will take the industry to new heights” /Damian Madray

If they are right, there’s hardly a way back. The flat revolution will unify the digital world under a single rule. Whatever will be in a different aesthetics will be judged as an oddity. While all the big brands are switching to the flat, that view might be truer than ever.

And this is exactly where I see the danger. While I admire the flat design aesthetics I’m afraid that many designers might fall into the trap that will ruin their design ambitions (and life of their users in the same, unfortunate, time). Oh yes… Flat design is tricky. Let me introduce you to 5 obvious dangers of Flat Design:

All 5 dangers might be summed up in a single sentence: Flat Design is hard.

And here’s your takeaway – a handy graphic: 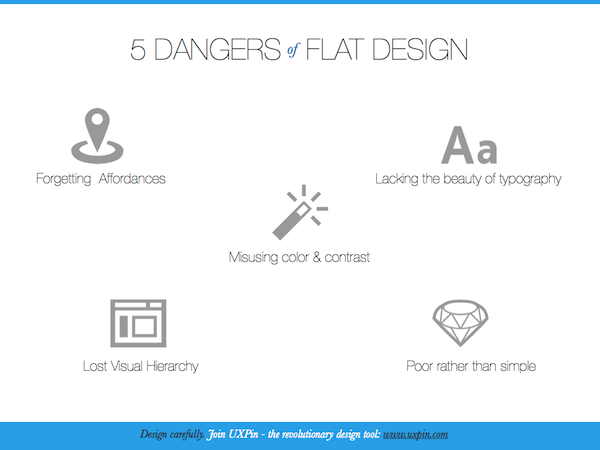