We’ve recently released our Merge-powered integration with Storybook that allows you to bring Storybook components to UXPin editor and design with them, keeping all the interactions available in Storybook. It helps break down the design and development silos and finally, let product teams use the single source of truth.

It’s the second integration (we also connect with Git libraries) supported by Merge technology that aims for keeping the parity between design and development, letting designers use the same components as devs do.

The UXPin-Storybook integration is the first like this on the market, so being a developer and seeing how much it can simplify things, I’ve decided to explore the topic from a developer-first perspective. Read on to learn more about the first step of using Storybook – importing UI code components. I’ve prepared a brief summary of what I experienced when making a project using create-react-app, installing the Storybook package and integrating it into my UXPin account powered by Merge tech for prototyping.

That’s cool… but like me at the beginning of this journey, you might not have heard of Storybook. Let’s see what it is and what it solves.

So for a TD; LR; If you’ve built projects that include component libraries using Frameworks such as React, Vue or Angular and don’t have a way to view or test each component with any possible state or combination of props quickly, then you can use Storybook to do this.

It allows you to build interactive component libraries alongside its own documentation internal to the project directory but outside of the main app in an isolated environment. Meaning, it makes your component build process and documentation more efficient and easier to use without changing your original code.

Want a little bit more and a real-life example, sure, here you go. You have a website that’s made up of components, which have several properties and several states. For example, a Form may have states for:

To test these states you’d have to props manually and load local versions of the app, it’s just so tedious and I would very rarely test each state when making a change. But, with Storybook, you can test each prop live in a local isolated environment. It makes things so much quicker and easier.

Storybook’s main purpose was to allow frontend developers who are working on projects utilizing Javascript frameworks to create and style component libraries. However, like most things, there are additional uses:

You have to install Storybook in your project. It’s a package, so for my Storybook test I used npx create-react-app to create a React project then installed Storybook using yarn sb init. I chose React because it’s what I’m most comfortable with and the docs seem quite extensive, but in addition, there is support for Angular, Vue, Web Components, Ember and more.

Storybook is now immediately usable after installation, and after it’s complete, simply run yarn storybook to start the local Storybook server, which will open your browser at http://localhost:6006  displaying your local Storybook component library with some pre-installed examples.

Even though Storybook isn’t plug-and-play as there is a little work to integrate your components, it’s still quite easy and fast. I was a bit confused about the syntax issues but their documentation is great and it didn’t take me long to fix them. Integrating your components is not all or nothing, meaning you can add each component one at a time, which makes the integration easy to troubleshoot.

This is the first component I wanted to integrate – a simple Button which takes several props.

The next step is to integrate it into Storybook by writing a stories file.

First, what is a Storybook story? A story is a possible rendered state that a component can support. You can have multiple stories each to describe a different state, for example, a Button component with stories for a warning, error or submit theme. For more information, look here.

So put simply, to integrate a component into Storybook requires:

This is what I meant when saying Storybook is outside of the main app in an isolated environment and doesn’t interfere with your existing code. All added functionality uses the story files, the original code doesn’t change. Additionally, no Storybook-specific libraries are required when creating a stories file.

Another great feature of Storybook is its ability to create your basic documentation automatically based on your source code. This helps tremendously with sticking to a single source of truth and is a huge time saver.

Here are the docs for MyButton component: 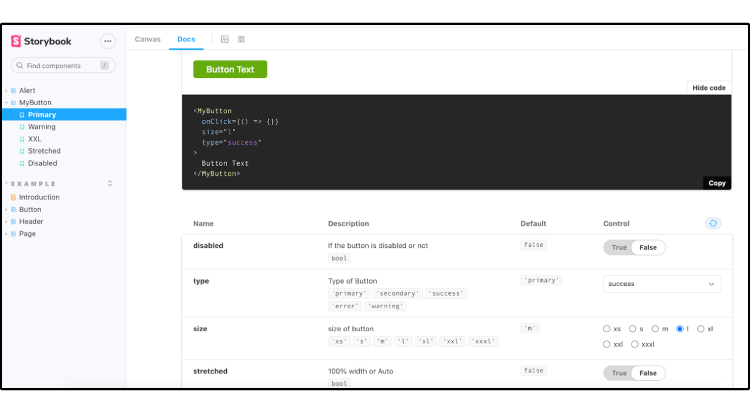 It also lists all Args you have in your source code, so you see all the different variants of your components. You can even just copy and paste the code for each! 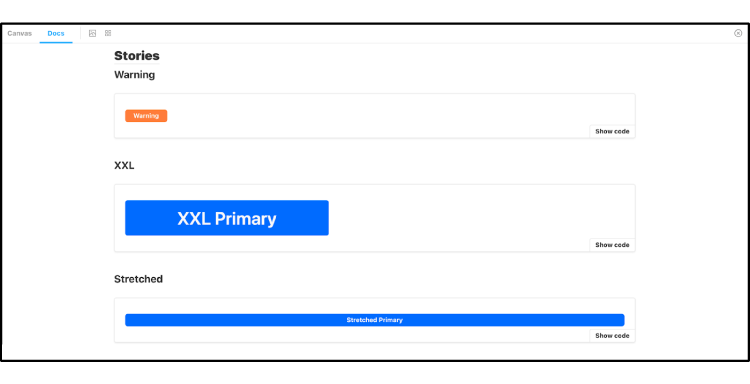 Publishing Storybook and integrating with UXPin

My experience of importing the components into Storybook hasn’t been too time-consuming – it actually was pretty simple as there is lots of documentation to help. The reason I felt inclined to learn more about this is because UXPin, using our Merge technology has added integrating your local or private Storybook as a library in the app, so I wanted to try it and also document my experience with this too.

So, following the UXPin Storybook integration documentation I got my components integrated into the UXPin editor in a minute. I could then (if I had more components) start to build prototypes using my integrated Storybook component library, in a live code environment, with all component interactions and functionality ready to play with.

Importing components into Storybook is easy and comes with a lot of benefits. On top of that, it can work as a single source of truth for product teams, reducing handoff to a minimum, getting rid of all the design-dev inconsistencies in projects. If you want to try it out, go ahead – our integration is on trial!