UX design experience that does no harm. What is it about? It’s about putting value over personal gain.

While it sounds perfect in theory, in practice it is hardly ever achieved. So, what is behind the value in UX design? Many UX designers make a mistake by thinking that value can be achieved by having enough technical knowledge. However, in UX design, like in design in general, psychology plays a more important role.

The Impact of Cognitive Psychology on UX Design

Cognitive psychology encompasses different studies of mental processes, including the research on attention and perception, memory, problem-solving and creative thinking.

Since cognitive psychology describes human behavior and what preconditions it, the benefits of it for UX design are obvious.

Cognitive psychology can help overcome the cognitive barriers to improve:

The ultimate goal is to create value for the target user, the experience that they will remember.

In support of the idea that people remember general experience rather than details, researchers from Tufts University and Brown University made an experiment by asking the participants to draw a U.S. penny. The participants were given the following tasks:

Now, a penny is what an average U.S. citizen uses every day. They should know what it looks like. But surprisingly, the performance during this experiment was very poor. The researchers came to the conclusion that people do not recognize anything about this object except its general value. This is because of memory limitation, a phenomenon in cognitive psychology.

Such cognitive psychology tricks can come in handy in UX design. Want to learn more? Take a look.

We all know the famous ‘action-reaction’ pattern from the experiment with Pavlov’s dog. People and dogs obviously are different anatomically, there is one similarity in how we learn.

In cognitive psychology, this ‘action-reaction’ pattern is called classical conditioning or Pavlov’s conditioning. In Pavlov’s experiment, he taught his dog that ringing the bell means that the food is coming.

In everyday human activity, this principle is the foundation of how we learn simple actions. If our tongue is dry, we drink water. If our belly rumbles, we eat. Or, if we click a ‘Features’ button on a website, we get the relevant information.

This principle can be applied in UX design to enhance navigation. Here’s one of the ways how it can serve the interest of UX designers.

For example, if a user sees a CTA button painted red, they will be more determined to press it. By creating a red CTA button you send a call to action, and you get the desired reaction.

Cognitive psychologists have found the link between the color red and the increase in attention a while ago. A study by the University of British Columbia has found that red increases performance on a detail-oriented task.

Blue, on the other hand, has a more calming effect, which is why it serves perfectly as a background color. This is a general approach to color perception and reaction to different colors in cognitive psychology, and it serves well for the general audience. But what if a certain gender dominates in your audience?

A study by Joe Hallock, principal design manager at Microsoft Azure, has indicated the difference between how men and women give preference to different colors: 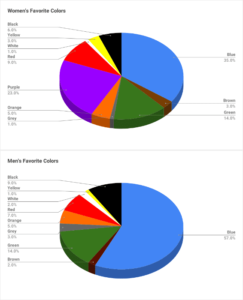 So, as you can see, the knowledge of how Pavlov’s conditioning works can be very helpful for UX designers, in particular, to choose the right color of the interface and create user-friendly navigation.

In cognitive psychology, this theory belongs to the study of perception. “The left-to-right theory claims that people mostly perceive information from left to right and from top to bottom”, says Melanie Sovann, a researcher at Studicus, an online educational platform.

Why mostly? While the top-to-bottom part of this theory is true to everyone, not all audiences perceive information from left to right.

It is well-known that Arabic readers, for instance, perceive information from right to left, as it is characteristic of their writing style. But even if the direction of writing is a point to argue in this theory, the placement of information from top to bottom is universal for everyone.

This theory is also employed in creating a mind map of the future design. With this theory in mind, you can create an order of the items, which you will later follow to improve navigation.

Continuing our conversation about cognitive psychology tricks that affect perception, now let’s talk about the theory that has an effect on the contents.

Chameleon effect is a well-known cognitive psychology theory that indicates that all people tend to mimic the emotions and feelings of others. Such behavior is unintentional (unconscious), but you can consciously employ it in UX design to create content that provokes certain emotions.

For instance, all Duolingo users, who skipped at least one language lesson, know this guy: 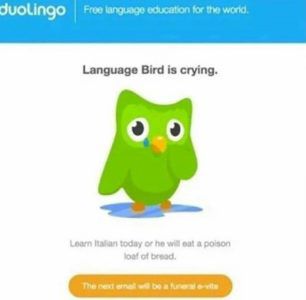 Crying duo bird makes them feel bad for skipping the lesson, which encourages them to return to learning and using the app.

Behind this, there’s an obvious intention to make the users mimic the duo bird’s feelings. Hence, we can see the Chameleon theory in action.

This theory is also very popular in content marketing. In content writing, for instance, writers would intentionally create certain introductions to provoke particular feelings and create an atmosphere based on certain emotions. This is done to achieve a certain goal, for instance, to make the reader feel skeptical or make them excited.

This theory is the explanation of why a middle child in the family always feels left out.

Another theory from the study of perception in cognitive psychology, serial position effect determines, in which order we perceive the items better. “The theory suggests that people can memorize the first and the last items best while having trouble recalling items placed in the middle”, says Dorian Martin, a researcher at WowGrade, a popular online educational platform.

What impact does it have on UX design? This theory, like left-to-right theory, can help UX designers identify how to position certain items to make the interface more user-friendly.

In general, this theory can work to create user-friendly UX design, however, it requires prior analysis, like heuristic evaluation or AB testing, before it is implemented.

It’s All In Our Heads

While you may have excellent UX design skills, they can’t always answer your questions about how the users will perceive the interface, what colors to choose, how to position the content, etc.

As cognitive psychology studies how the human brain perceives and processes information as well as how it forms certain patterns of behavior, cognitive psychology theories can be quite helpful for UX designers.
From well-known tricks, like Pavlov’s conditioning and Chameleon effect, to the Left-to-Right theory and Serial Position effect, UX designers can draw a lot of advantages to achieve the value that UX design is all about.