High-Fidelity Prototyping vs. Low-Filedity Prototypes: Which to Choose When?

Prototyping is an essential part of the UX design process. Prototypes allow designers to test design ideas and user flows before committing to the final product.

Prototypes help validate what works but also expose missing elements and features. Without the prototyping phase, companies would waste precious resources iterating over the final product.

In this article, we will explore low-fidelity and high-fidelity prototypes—which to use and when?

UXPin is a collaborative design tool allowing teams to create low-fidelity and high-fidelity prototypes to test at every stage of the design process. Sign up for a 14-day free trial today and start designing better products with UXPin.

What is a Prototype?

Before we begin, it’s important to define a prototype. Many people confuse prototypes with static wireframes and mockups.

Prototypes use wireframes and mockups with clickable elements to simulate interactions and user flows.

UX teams might even create low-fidelity paper prototypes in the early design stages to demonstrate how a user might navigate through a product.

Whether UX designers use paper or digital wireframes, low-fidelity prototyping is the first step in testing design ideas and user flows.

Low-fidelity prototypes are either hand-drawn or basic digital wireframes without color or content. These low-tech designs allow UX teams to visualize each screen’s layout, test navigation, and experience user flows.

A great example of a digital low-fidelity prototype is a typical eCommerce checkout flow. After creating a wireframe or low-fidelity mockup, UX designers will use buttons or links to connect each screen and create a checkout flow.

Using a low-fidelity prototype, UX designers can experience the checkout flow—ensuring each screen has the correct elements and the user can navigate forwards and backward throughout the flow.

High-fidelity prototyping is where a product begins to take shape. Using mockups with color and content, designers can create hi-fi prototypes that look and function as close to the final product as possible.

If we go back to our eCommerce example, designers can include product images and colored CTAs to entice users down a particular flow—like completing a checkout.

UX designers can also add interactions, like an overlay showing the user’s cart when adding a new item. They might also add screen transitions to indicate a user’s movement through the checkout flow.

Which Prototype to Use and When?

Now that you have a solid foundation of high-fidelity vs. low-fidelity prototyping, we can begin to explore which you would use and when.

When to Use Low-Fidelity Prototypes

Low-fidelity prototypes are best for the early stages of the design process. UX teams can use paper prototypes before they even sit down at the PC. These low-tech paper designs are also great for collaboration and exploring lots of ideas at speed—perfect for design sprints!

When NOT to Use Low-Fidelity Prototypes

Unless you’re testing basic user flows, low-fidelity prototypes do not provide meaningful feedback during usability studies. Users might get distracted by the unfamiliarity of the product and thus focus on the wrong elements.

When to Use High-Fidelity Prototypes

UX teams should only move from lo-fi to hi-fi prototyping once designers have completed mockups to complete at least one user flow for testing.

These mockups must include clickable links and elements, color, and content—but might not require interactions, animations, and transitions for the first round of usability studies.

High-fidelity prototypes are helpful for testing layouts and how page transitions or scrolling might affect content and elements. UX designers can also test how interactions, animations, and transitions affect the user experience.

High-fidelity prototypes should be the last stage of the design process before handing over to engineering.

When NOT to Use High-Fidelity Prototypes

UX designers must not build high-fidelity prototypes before researchers have thoroughly tested lo-fi prototypes and created mockups with content, and color.

UXPin provides design teams with powerful tools for prototyping at every stage of the design process.

With your wireframes complete, you can create basic lo-fi navigation between pages with tap/click interactions. Achieve vertical or horizontal scrolling with a single click.

With your lo-fi prototypes complete, you can preview your design in the browser or test on any device using UXPin Mirror.

Provide feedback and assign changes to designers using UXPin’s comments feature. Designers can create private notes for themselves and click resolve once complete.

If you have ever worked with Figma, Adobe XD, and other popular design tools, then you’ll LOVE the added functionality UXPin provides—enabling you to take your high-fidelity prototyping to the next level and beyond! 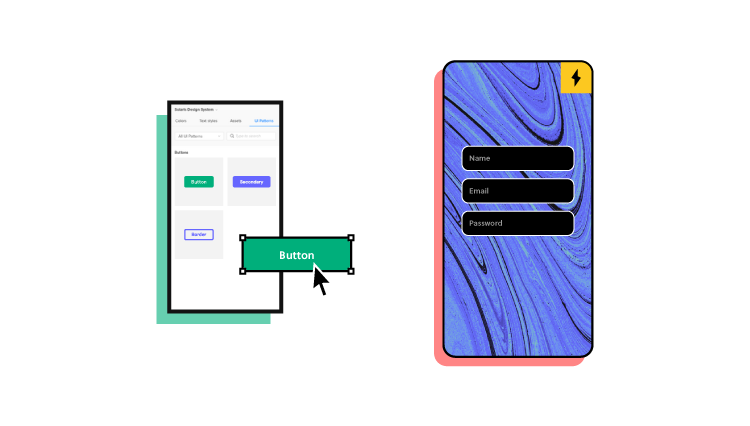 Create reusable components to maintain consistency and build page layouts fast! If you need to make changes, simply edit the master, and the changes copy to all child components.

UXPin’s variables feature allows you to store data from user inputs and take actions based on the data provided. For example, on a signup page, the user enters their name. On the next page, you can use the name (let’s say John) to personalize the experience—Welcome to UXPin, John!

You might also want to store dummy credit card details so users can get a clearer sense of how the product will capture and display credit card information at checkout.

UXPin Merge lets DesignOps take prototyping beyond the next level! Design high-fidelity prototypes with React components from your Git repository or any components from Storybook.

Create functional and interactive elements generated from production code to give usability participants, stakeholders, and clients that “final product experience” you can’t get from other design tools.

Sign up for a 14-day free trial and experience the endless possibilities of prototyping with UXPin.