Why You Should Switch to Code-Based Design

Since the very beginning of digital product design, the default way of designing user interfaces has been image-based. Designers have been drawing different states of the mobile app or web designs using graphic design tools – GIMP, Fireworks, Sketch, or now Figma, Invision, Adobe XD (which you can in Adobe Creative Cloud) – and then the development teams have been writing code that would replicate what has been drawn. But over the years this method has proved to have considerable limitations. What limitations are those and is there an alternative? Read on to find out.

The Problems with Image-Based Design

In the image-based design approach, designers produce a set of static artboards representing different states of the interface and forward them to software developers to code interactive interfaces on their basis. This brings about a lot of troubles for not only the UI design but also the whole product development process – let’s have a closer look at them.

The benefits of code-based design

This alternative approach to product design allows designers to render their design intent directly in code… without even knowing how to code! Whenever they draw something, the tool creates relevant HTML, CSS or Javascript, and engages the browser, showing the result visually. This totally flips the entire software designing process, making it more efficient and beneficial for everyone involved. The benefits are:

Unlike image-based tools, the code-based approach provides 100% match between the intent of a designer and a code-able result. That’s because code-based tools use the same technology as those used in web development to render all of the design projects. As a result, designers can benefit from the full power of code without any coding expertise.

Code-based design tools allow for drawing objects that move, interact, and create complex patterns – on the highest level of interactivity. Before coding the final version, software developers can fully experience the product instead of just imagining how it should work. There’s no redundant code, so the software works quickly and it’s easy to maintain it. And as the provided designs reflect the approved standards for software development, the final products created by a given company or a software house are consistent with one another.

The code-based design establishes a common language for both designers and software developers. Since everyone involved in the process uses the same technology, there are fewer misunderstandings between teams, especially on the handoff stage. You can even go a step further and use a technology such as Merge which allows you to take components that have already been coded by engineers and import them into your code-based design tool. It uses elements that can actually be coded – because those ready and interactive components come from developers.

This establishes a single source of truth for your entire software project – all the components and documentation are stored in a components library like Git (importing React components) or Storybook and designers and engineers are connected in one collaborative, creative process, preventing misunderstandings and frustrations from building up. Also, it helps to avoid inconsistencies in the user interface, code, and documentation – which in the long run saves a lot of time and money by optimizing the design process. 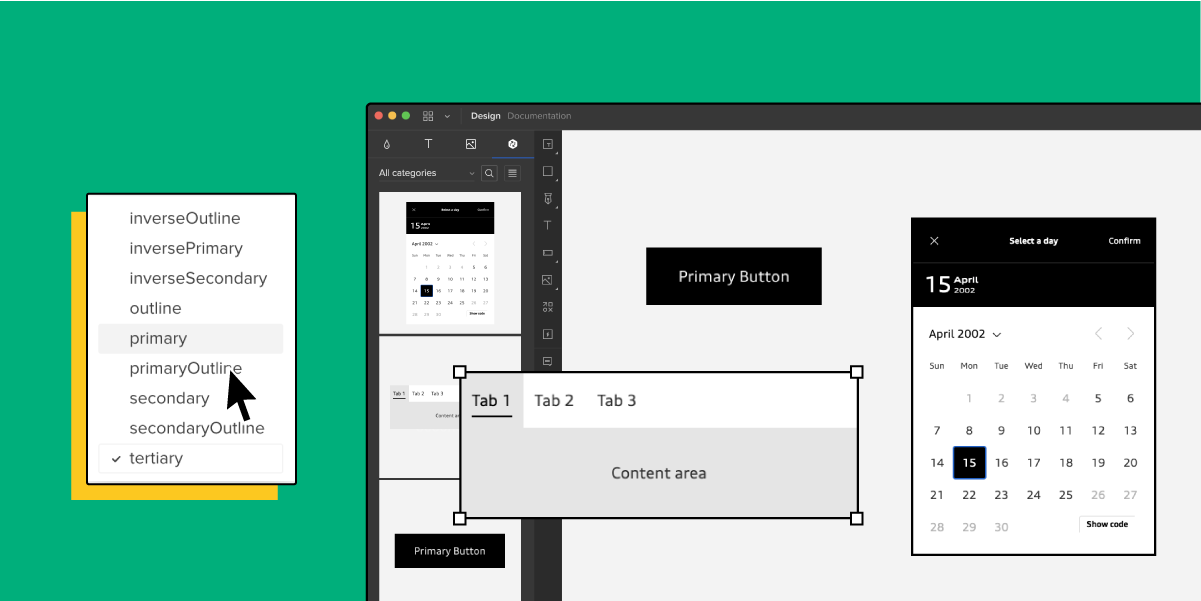 Code-based design allows you to have richer prototyping options. And with the aforementioned Merge tool you can greatly extend them. You can create your own components that can be reused all across interfaces of different products you work on. This saves your entire team a lot of time and effort on designing, coding, and testing particular elements – you only need to do it once. And this also means there are fewer bugs in your products.

Using code-based design allows you to create prototypes that look and behave exactly like the final product built by developers. Instead of linking artboards, code-based design tools use the most advanced interactions on the components level, allowing designers to create highly reusable interactive design systems. Simply put: designers draw interfaces with text fields that can be clicked in, checkboxes that can be checked and unchecked, and so on. Goodbye, static artboards!

Don’t just take our word for it – some of the top UX designers in the industry corroborate what we say. UX Design team at PayPal did a test of Merge, our new technology in our code-based design tool. Our solution has accelerated their work while giving them the power to easily create their own beautiful high fidelity prototypes consistent with their Developer Console standards. When compared with an image-based tool, the design quality was much better and there were fewer errors. Also, unlike the competing image-based software, the drop-downs, calendar buttons, and data table controls made using UXPin Merge were interactive. And the entire designing process took less than 1/6th of the time spent doing the same job using the competing software!

As you can see, switching from image-based to code-based design is a no-brainer. It can only save your team time, effort – and frustrations. To unleash the power of merging the design and development workflows, sign up for a free 14-day no-obligation trial with a test Storybook library.

Free e-book on improving the UX process for B2B enterprises.