UX vs. UI Design – The Differences You Need to Know

One of the most common debates in the UX world is UX vs. UI design—where are the differences and similarities? Do you need a UX designer and a UI designer? Who does what? Should they be separated? How do they work together?

The confusion arises because most institutions teach user interface design as part of the UX design curriculum. UI is part of the user experience so, why are they separated?

While these roles are separated, they all focus on user-centered design to create a fantastic customer experience. To do this, UX teams must work together to solve user problems within budget, product, and technical constraints.

UXPin is a collaborative design tool that cultivates strong communication between your entire organization, including UX teams, product designers, engineers, and other stakeholders.

What is User-Centered Design?

User-centered design is the process of designing a digital product with the customer as the central focus. Don Norman, former Apple employee and founder of the Nielsen Norman Group, coined the term in his 1986 book, User-Centered System Design: New Perspectives on Human-computer Interaction.

In it, he writes: People are so adaptable that they are capable of shouldering the entire burden of accommodation to an artifact, but skillful designers make large parts of this burden vanish by adapting the artifact to the users.

What Don is saying is that it’s the job of user experience designers (UX & UI) to A) solve a human problem and B) adapt the product to eliminate the user’s limitations.

What is UX Design?

UX design encompasses the broader user experience and how people feel when interacting with a product—including user interfaces. UX designers also focus more on navigation and user flows to optimize the product’s experience and make it more enjoyable and user-friendly.

What is UI Design?

User interface designers create the visual elements users interact with in a digital product or website—buttons, color, icons, typography, images, forms, and other elements and components.

Additionally, UI design is concerned with interactivity like animations and microinteractions.

As you can see from the responsibilities, UI designers focus on aesthetics and interactivity, where UX designers look at the overall experience, structure, and navigation.

UX designers have a broad view of the product experience, while UI designers focus on what’s happening within each screen.

Here are some key differences between UX vs. UI design through the design thinking process.

UX designers and UI designers both focus on user-centered design and follow UX design thinking principles. UX designers define users’ goals, and UI helps them achieve those goals. They both seek to optimize the user experience and solve usability issues.

It’s important to see UI and UX as one entity rather than two separate departments. Both are user experience designers—they’re just focused on different tasks within UX design.

If designers execute either of these tasks poorly, the entire user experience and product will fail—no matter how strong the other might be!

UX and UI designers must both consider accessibility. The UX designer focuses on product usability, such as layout, hierarchy, and placement, while the UI designer looks at user interface accessibility, including colors, fonts, sizing, and interactions.

Here is a typical product design scenario and the split between UX and UI responsibilities.

This example is by no means an “industry standard” approach. UX and UI designers will work closely throughout the design process.

The UX designer lays the foundation while the UI designer focuses on interaction and aesthetics. To achieve these tasks, both designers must be aware of the user’s needs to create a delightful user experience.

UX and UI designers will usually use the same design tool but for different tasks and objectives.

The UX designer will create wireframes and link each screen with basic click/tap interactions to create low-fidelity prototypes. They’ll build the structure of each page using a grid system and include navigation. 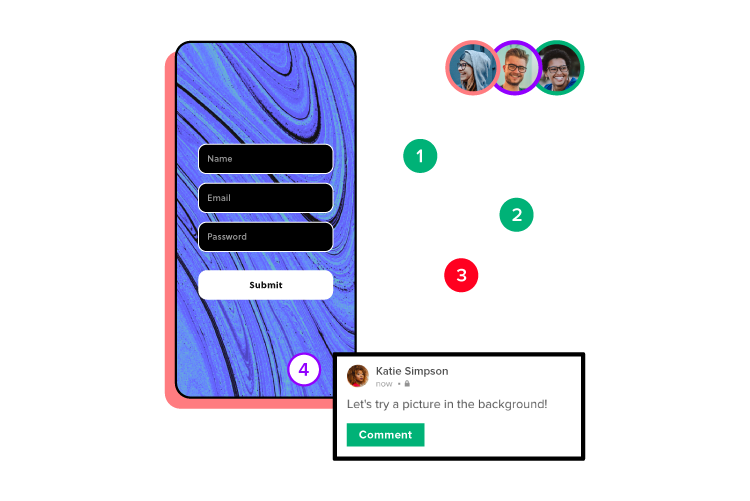 UXPin is an end-to-end user experience design tool UX and UI designers can collaborate on to build incredible products for their customers—from wireframing to prototypes to the final design handoff.

Invite product teams, developers, and other stakeholders to preview prototypes in the browser. They can leave feedback via UXPin’s Comments functionality and even assign UX and UI designers tasks to action.

Why not try UXPin for yourself? Sign up for a 14-day free trial to discover a collaborative, code-based design tool built to enhance the user experience.