Actions are the methods by which users interact with your prototype. That is, they do something when users click, swipe, or hover over them.

Every interaction has at least three parts.

A few others, like “set step,” “toggle,” and “move to”, have additional options like step, animation type, and distance, respectively. 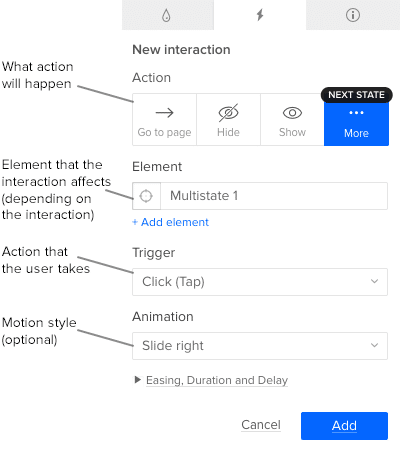 From buttons to boxes to images to groups, you can make any element in UXPin interactive. And any element can have more than one interaction. For example, a button can change color on hover, and take users to another page on click. A few simple interactions can make most any element change basic properties to give the user more information, as when a button darkens on hover to indicate that it’s clickable.

When users trigger an interaction, an action affects one or more elements on the canvas. For example, on hover (the trigger), a button may turn brighter (a color action).

The element is an item that changes when actions are triggered. Although any element or group can take an action, different kinds of elements can accept different actions. For example, an interaction can change a box’s color, but not a group’s. By the same token, the “next state” action only affects multistate elements. Learn more about special element interactions.

When the user interacts with an element, they cause an action to begin. These are standard interactions, like clicking or hovering, that are common to human/computer interfaces. The triggers in UXPin are:

Simple interactions can make a big difference in how users react to interfaces. And there are plenty you can do with them. For example: